The writing-mode property allows us to determine the direction in which content flows on the web page. 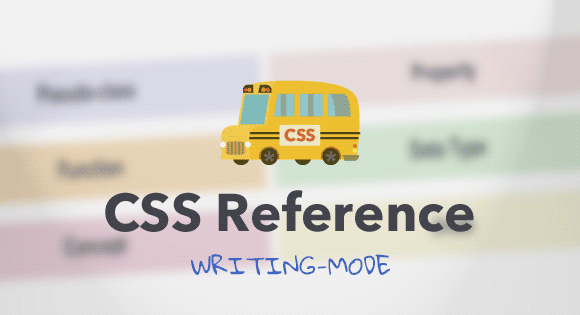 The inline base direction determines the direction of content flow on a line of text, where the line starts and where it ends. Although there are CSS properties that can affect this behavior, HTML already possesses markup features to control bi-directionality, e.g. the dir attribute. We should use those instead of CSS styling to ensure layout remains correct in the absence of style sheets.

horizontal-tb
This is the initial value. Text is rendered from left-to-right, with a top-to-bottom block flow direction. Both the writing-mode and typographic-mode are horizontal.

vertical-rl
Text is rendered from top-to-bottom, with a right-to-left block flow direction. Both the writing-mode and typographic-mode are vertical.

vertical-lr
Text is rendered from top-to-bottom, with a left-to-right block flow direction. Both the writing-mode and typographic-mode are vertical.

sideways-rl
Text is rendered from top-to-bottom, with a right-to-left block flow direction. The writing-mode is vertical but the typographic-mode is horizontal, with the glyphs set sideways on their right side.
*Experimental value, may be differed to CSS Writing Modes Level 4

sideways-lr
Text is rendered from top-to-bottom, with a left-to-right block flow direction. The writing-mode is vertical but the typographic-mode is horizontal, with the glyphs set sideways on their left side.
*Experimental value, may be differed to CSS Writing Modes Level 4

The following examples illustrate how the writing-mode property affects the layout of different scripts.

Although vertical text is most commonly seen and used on sites in East Asian languages, the design aspect of using vertical text can be applied to Latin-based writing systems as well. The following is an example of a responsive navigation bar that uses a vertical text layout on narrow screens. Resize the preview panel when opening this demo to see the navigation changing:

The next example shows how a blog category can be displayed as a vertical label on the right of the post on wide screen layouts. The label is not necessarily critical information, but it is useful to have, so placing it on the right of the page, laid out vertically, allows the reader’s attention to be focused on the header and text of the article.

Property to define whether lines of text are laid out horizontally or vertically and the direction in which blocks progress.