The margin property is a shorthand property to set the four margin properties: margin-top, margin-right, margin-bottom, and margin-left, in one declaration.

Every element on a web page is rectangular. Each element has a rectangular box model, which describes each of the rectangular boxes (areas) generated for the element: the content box, the padding box, the border box, and the margin box. The content box exists for every element. The padding, border, and margin boxes are optional, and their existence depends on whether you apply a padding, border, or margin to an element.

Sometimes, adjoining margins of two or more boxes (which may be next to each other or nested) combine to form a single margin. This is referred to as “collapsing margins” in CSS.

There are many situations when margins collapse, and several solutions that can help prevent this from happening. Since this is outside the scope of this entry, we’ve gathered a list of useful resources that you can read to learn more about this. The resources are the following:

Animating from/to the value auto is generally not possible in CSS.

Each of the <margin> values corresponds to one of the four margin sides: top, right, bottom, and left, respectively.

Each margin can have one of the following values:

The auto value basically tells the browser to calculate the margin. In most cases, a value of auto will be equivalent to a value of 0 or else whatever space is available on the side of the element at which the auto value is used.

The value auto is mostly useful for centering an element horizontally inside its container, by applying it to the horizontal (left and right) margins of the element. (see demo below for an example)

The auto value can not, however, be used to center an element vertically by applying it to the vertical margins.

inherit
The element inherits its left margin value from its parent.

The margin can also be negative. Negative margins pull the element closer to other elements around it instead of increasing the space between them.

Negative margins can be used to offset an element outside the boundaries of its container, too. (see demo below)

The margin property works in all major browsers: Chrome, Firefox, Safari, Opera, Internet Explorer, and on Android and iOS. 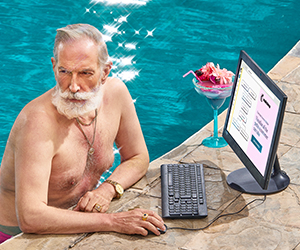