The clip-path property is used to specify a basic shape (<basic-shape>) or reference an SVG path (<clipPath>) to be used as a clipping path on the element.

The element can be an HTML element or an SVG element. (See Syntax and Values sections.)

Clipping is a graphical operation that allows you to fully or partially hide portions of an element. The portions of the element that are shown or hidden are determined by a clipping path.

Conceptually, any parts of the element that lie outside of a clipping region are not drawn. This includes any content, background, borders, text decoration, outline and visible scrolling mechanism of the element to which the clipping path is applied, and those of its descendants.

A clipping path is conceptually equivalent to a custom viewport for the element it applies to. Thus, it affects the rendering of an element. It does not affect the element’s inherent geometry. The boundaries of a clipped element must remain the same as if it were not clipped. The element will affect the flow around it as it normally would, and every other element on the page will still see and treat the element as if it were still rectangular, even if it’s clipped to a non-rectangular shape. If you want to change the way the content around the element flows and have it respond to the defined shape of the clip path, you can use the shape-outside property.

If the clipping region exceeds the bounds of the user agent’s document window, content may be clipped to that window by the native operating environment.

An element’s ancestors may also clip portions of their content (e.g., via their own clip or clip-path properties and/or if their overflow property is not visible). What is rendered is the cumulative intersection.

The clip-path property should restrict the areas of the element that accept pointer events to the clip path it defines/references. Pointer events must not be dispatched on the clipped (non-visible) regions of a shape.
This means that the element should not respond to pointer events like hover or click events even if it is hovered or clicked outside its visible region.

Clipping paths defined using basic shapes can be animated just like shapes defined for the shape-outside property can.

In short, a clipping path can be animated from one shape to another because it is made up of points. These points have coordinates that are either length or percentage values. And since lengths and percentages are animatable, shapes can be animated as well. So, basically, you’re animating the position of the points that make up a shape.

Before the clip-path property was introduced, in CSS 2.1, the clip property was used to clip parts of an element, similar to the way clip-path works.

However, the clip property was very limited: the only supported clipping shape was a rectangle shape created using the rect() function.

Moreover, clip only worked on absolutely-positioned element, which limites its use a lot. Even in SVG, it was limited to specific elements as well.

These reasons, among others, are why the clip-path property was added to the SVG specification and then adapted by the CSS Masking module today.

If you’re interested, you can read more about the clip property in its entry.

The clip-path property is a great companion to the CSS Shapes properties, particularly the shape-outside property.

You can read more about CSS Shapes and using clip-path with them in the shape-outside property entry, and see the above demo live in the Examples section below.

The <geometry-box> can be either a <shape-box> or one of the three keywords: fill, stroke, view-box.

The <shape-box> defines the reference box for the <basic-shape>s created using the shape functions. It can be one of the following values: margin-box, border-box, padding-box, content-box. These boxes are applied and can be used on HTML elements.

On the other hand, the SVG geometry box values will resolve to border-box when used on an HTML element.

<clip-source>
A <url> pointing to an SVG clipPath element that is to be used as a clipping path.
<basic-shape>
A basic shape function as defined in the CSS Shapes module (See the shape-outside property entry). A basic shape makes use of the specified reference box to size and position the basic shape. If no reference box is specified, the border-box will be used as reference box.
<geometry-box>
Can be either a <shape-box> or fill, stroke, or view-box.

A <shape-box> is applied to an HTML element and can be one of four possible box values: margin-box, border-box, padding-box, and content-box.

If specified in combination with a <basic-shape> it provides the reference box for the <basic-shape>. (See the shape-outside property entry for details and more information.)

If specified by itself, uses the edges of the specified box as a reference box, including any corner shaping (e.g. defined by border-radius), as a clipping path.

In addition to the <shape-box> values, the other three values can be applied to SVG elements and have the following meanings:

For elements with associated CSS layout box, the values fill, stroke and view-box compute to border-box.

none
No clipping path gets created.

A computed value of other than none results in the creation of a stacking context the same way that CSS opacity property does.

If the URI reference is not valid (e.g it points to an object that doesn’t exist or the object is not a clipPath element), no clipping is applied.

The following are examples of using the basic shape functions with the clip-path property:

The following is a live demo of the above example using the clip-path property in conjunction with the shape-outside property. The code looks like the following:

The following example uses an SVG path as a clipping path:

The SVG in this example is embedded in the document:

The result of applying the above path to an image would look like the following: 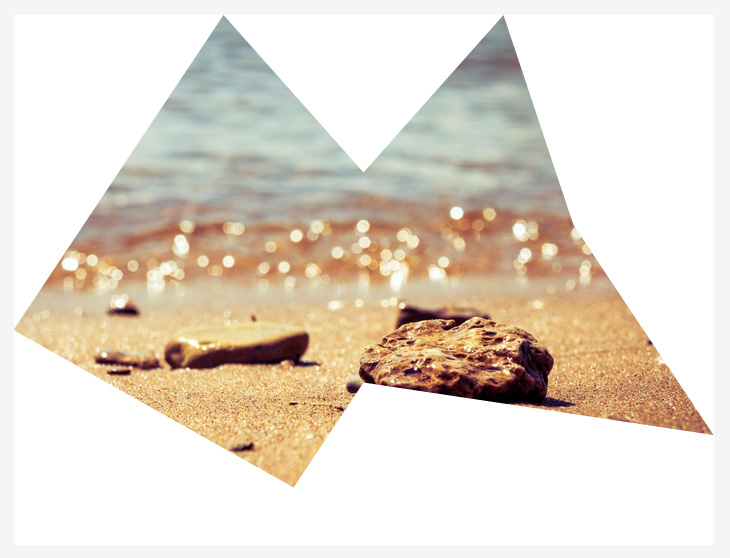 The following is a live demo of the above example. Note that the demo may or may not work in your browser. Please see the note on browser compatibility below for more information.

The following is a screenshot of a nice tool by CSSPlant that allows you to visually create a clip path for the clip-path property. The tool then generates the code for a polygon() function which you can then directly use as a value for clip-path.

The clip path generator can be very useful and time-saving, so make sure to check it out!

The following demo uses the polygon() function to clip an element using clip-path. The element has a scroll bar that is only partially visible because it lies almost completely outside the clipping region defined by the clip path.

Moreover, the polygonal clip path is animated. It animates into another shape when you hover over the element.

Try changing the values of the clip path and/or removing it to see how the element looks like in all cases.

Method of defining the visible region of an HTML element using SVG or a shape definition.

This module, as you can see in the support table above, hasn’t been fully implemented in all browsers, so you’re probably not going to be able to use all features even in browsers that have implemented certain properties (for the time being). In Canary, for example, the clip-path property accepts a shape box to specify its reference box, but that’s not yet implemented in the stable channel of Chrome.