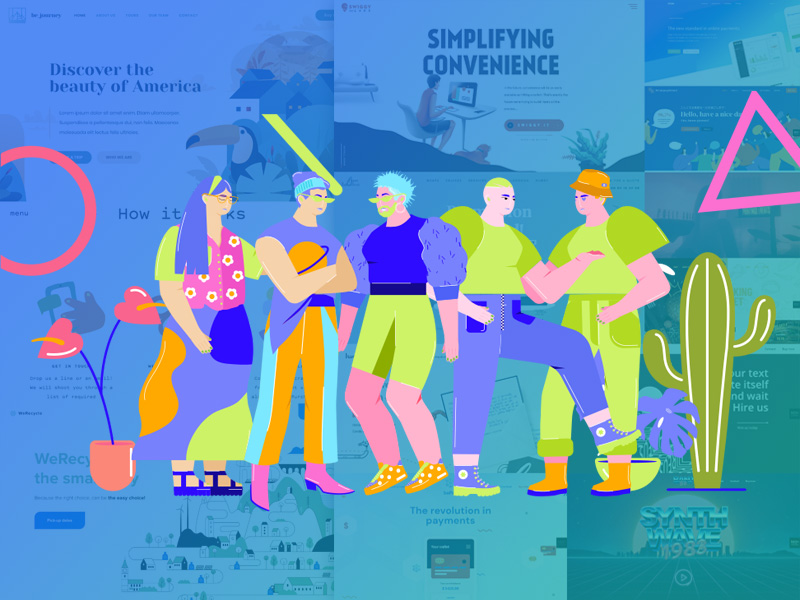 When building a new website, one of the very first decisions you’ll need to make is:

What kind of visual style do you want to use?

Does the practical and realistic nature of photographs fit well with your brand? Or does it make more sense to turn to a more abstract and creative approach and use illustrations instead?

This is something we’ve accounted for when creating our pre-built sites for BeTheme. We wanted to reflect a wide array of illustration styles so our customers not only get to see how diverse this visual style is, but also have a robust source of inspiration for their own designs.

We’re not alone. There are many great websites out there that creatively use illustrations. And, today, we’re going to take a look at a number of them as we explore the seven reasons why you may want to use illustrations to style a website:

1. When a photograph can’t fully capture a complicated subject

If you’ve ever tried to find a photo for a brand and struggled to pick out something that accurately reflected who they were or what they did, it’s probably because the subject was too difficult to capture.

That can mean any number of things.

It could mean that the subject itself is too difficult to photograph. Copywriters are a good example of this. While they could get someone to photograph them while typing away on their computer, there’s nothing very exciting about that. A photograph would simply capture the mundane task of writing, which is what the client would be trying to avoid.

If you take a look at the BeCopywriter 2 pre-built site, you’ll see that an illustrative style is a much better way to approach this:

The design is striking. The words are powerful. And the illustrative touches add a unique touch to the overall look.

There are other kinds of websites that would be better off with illustrations if their subjects are too complicated to capture. Take, for instance, a recycling services company like WeRecycle:

While it’s possible to pick out images or take real-life photos of recycling, that doesn’t fully capture what this company does. Rather than focus on individual scraps of trash, illustrations enable companies like these to give website visitors the full scope of what they do.

It’s a much more powerful image, to say the least.

2. When a brand has a unique look that requires a unique approach

Every brand has its own style and personality. Without a unique edge, it would be hard for consumers to differentiate between similar solutions.

That said, some companies have styles that are way out there, which means that some of the traditional rules of web design can get thrown out the window.

One way we see this happening is when photographs and illustrations blend. This allows a brand with a surreal, edgy, imaginative, or whimsical look to leverage the traditional elements of design while shaking things up.

For example, this is how the BeFoodTruck pre-built site handles it:

The illustrations are a unique choice for a business in the food industry, which would instantly make this site a standout. That said, without real photos of food, it would be difficult to convince customers to dine in or out.

That’s why the balance between the two styles works so well.

Handwrytten is a website that uses a similar balance between real photos and eye-catching illustrations:

In this case, the illustrations are animated, which gives the homepage yet another unique twist. This concept alone is already quite innovative and now they have a site to match it.

3. When a company wants to stand out from photo-strewn sites

When it comes to certain industries, the expectation is that their websites will have a similar look to them.

Take the travel and hospitality industries, for instance. Because they’re in the business of selling in-person experiences — or telling stories about them — you’d figure that photos are the only option for those websites.

But if your website is trying to compete amongst an endless supply of lookalike companies, using illustrations may be the thing that sets them apart.

Although the site isn’t complete devoid of photos, the majority of it is designed with illustrations or illustrative touches.

Bateau Mon Paris is a boat rental company in France that takes a similar approach:

You can see the peekaboo photo poking out there, but, for the most part, this website’s main visual style is illustration.

4. When a new company wants to leverage the style of a brand that consumers already trust

You see this quite often when brand new companies enter high-risk spaces. They design their branding and website to be reminiscent of a well-established company that customers already trust.

That way, there’s an unconscious association in prospects’ minds between the two companies and it eases the concerns and doubts that often arise when working with a new company.

One such company’s website that became the standard for other software companies entering the space is Stripe:

Stripe’s illustrative style (as well as its choice to use gradients) has been copied for years. And it’s been a good look to emulate.

Our BePay 2 site takes the trust-building elements that we see in Stripe and puts a unique spin on them:

The site is designed using illustrations, including the mobile application images. The color blue is also prevalent, which is a color that’s symbolic of stability and trust.

5. When a creator has an interesting story and work to share

Although you’ll find some design agencies and web developers who use photos of themselves and their teams on their websites, many times creative types use illustrations instead.

One reason why they go this route is because it’s another way to flex their creative muscles and to show prospective clients what they can do.

Another reason takes us back to point #1 in this post. Unless they have a large team and an interesting-looking studio they work from, photos aren’t going to be the most exciting way to capture what it is they do.

The BeBand 5 pre-built site, for example, uses illustrations and animations to give its site an 80s-style look.

Unless band members are in the habit of dressing up like rockers from the 80s, photos wouldn’t accurately capture the style of music the band plays. But this unique illustrative style certainly does and also proves useful in drawing attention over to their music.

Artist Polly Kole has taken a unique approach to building an illustrative website:

In addition to the dramatic and intriguing look of the site, it’s interactive too. It’s almost as though the site emulates the experience of going to look at art (maybe not the interacting part, but being able to walk around it).

6. When a company is selling a smart app or resource

Companies that sell “smart” tools to users commonly design their websites with illustrations instead of photographs. And it makes a lot of sense.

For one, these companies aren’t really selling the product itself. While the experience inside an app or using a device matters, what they’re selling on a website is a solution to the users’ problems which often involves managing a lot of data. That’s not an easy thing to depict with photos.

Another reason they use illustrations — or, more specifically, vector graphics — is because geometric styling is a good way to give a website a stable and logical feel.

BeApp 6 uses data visualizations to really hammer home the strengths of the app:

While designers could use screenshots from within their apps to do something similar, this approach enables them to highlight important elements within the product in an attractive way.

While the designer of the site could’ve chosen to display the actual products they’ve built, this is a much more interesting approach. When you drag the “Swiggy It” toggle to the right, the hero image comes to life with animations and messages that allude to what the company does.

7. When a brand’s target audience is children (or their parents)

This is another no-brainer use case for illustrations on the web. Considering how comfortable children are with cartoons, games, and apps, an illustrative style is much more relatable when trying to reach this audience — or even their parents.

BeLanguage 3 is an interesting case because it’s a language learning website:

Other kinds of organizations that serve children or their families can use illustrations to simplify language and strengthen their sales pitch as See Make Play does:

The illustrations on this site give it a fun and youthful quality. In this particular part of the homepage, the illustrations are static images. However, elsewhere on the page, parents and their kids will encounter animated graphics that bring a lighthearted touch to this site.

If you’re finding it difficult to use photography to tell your brand’s visual story or are thinking about pursuing something a little less conventional, illustration might be the solution.

As you can see in the websites from BeTheme and others around the web, illustrated websites are in no short supply. And, yet, whenever you encounter one, they tend to have a unique look you can’t help but look away from.

If you want to make your website really stand out, an illustrated website would be a fantastic style to experiment with.